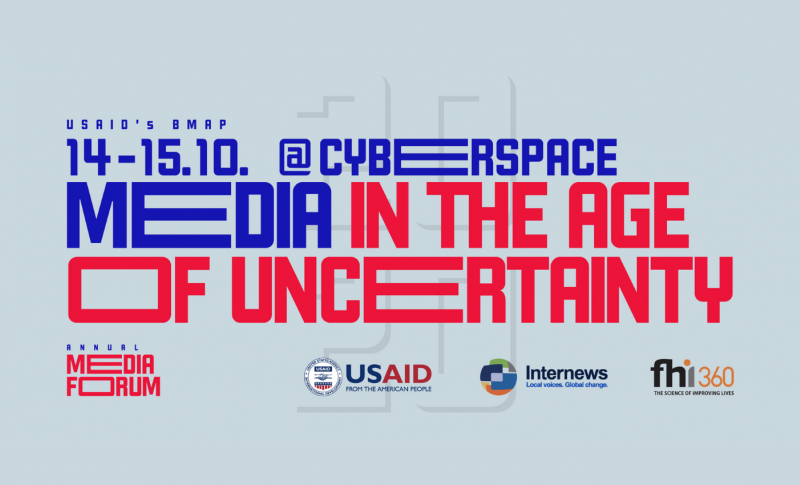 The Annual Media Forum provides an important opportunity to bring together representatives from USAID's BMAP partner media outlets across the region to share best practices and lessons learned, deepen their understanding of global and regional trends, and seed or strengthen partnerships in order to advance solutions to common challenges in content production and content monetization in the digital environment.

Below you can find short biographies of the speakers on Annual Media Forum 2020.

She has been working at I&F Grupa, one of the leading marketing communications networks in southeastern Europe and the Nordic region, since it’s founding in 1997. She has been active in the marketing and communication field, both locally and regionally, for more than 30 years. At I&F Grupa, Vanda started as Research & Planning Director, followed by two years of being Managing Director at McCann Skopje and two years of developing the Montenegro office. Later on, she became first the New Business Director at McCann Grupa and then the Managing Director of the first digital agency in Serbia – MRM. For the past nine years, Vanda has been the Head of Corporate Affairs, responsible for corporate relations with various stakeholders (state institutions, professional associations) and all CSR initiatives and strategies. Currently, she is a Board member of the professional associations IAA and UEPS. She was Board member of the business association SAM. With I&F Grupa, Vanda has been developing an active relationship with ASMEDI, AmCham Serbia and other regional offices, as well as with the Nordic Business Alliance, as a representative of professional associations. Vanda was a member of the working group responsible for the new Law on Advertising in Serbia. With the IAA, Vanda was the initiator of an advertising self-regulatory body, responsible for communication with the EACA and EASA on these topics, the coordinator of the working group in charge of drafting the National Code of Ethics in Advertising. Now she is the President of the Board of the first national self-regulation body - National Association of Ethical Standards in Advertising - NAESA.

A marketing professor, author, and consultant specialized in digital marketing & datadriven marketing, integrated marketing communications, and digital media consumption. Conducting survey, experimental and data-driven research in various industries such as retail, media, and telecommunications in Europe and the US.

A Chief Marketing Officer at Brainster, an education company that offers career-changing trainings in the field of IT and digital skills. He is an experienced digital marketing specialist, lead instructor at Brainster's Digital Marketing Academy, and a marketing and communication consultant with experience in working with media among other industries. His main fields of interest are Education & Life-long Learning, Digital Marketing Strategy, Digital Transformation & Data Analytics.

A multimedia director by profession, obsessed with new ideas. Her love towards storytelling started when she was a teenage TV actress. After a colorful career and many vibrant experiences, she finally discovered her true calling in the creative industries. Today, she is excited to use all of her gained superpowers to make sure that there is a strong story behind those shiny wrappers.

Bold, clean, and simple are his favorite words. He is dedicated to his work and does not plan to retire - ever! His biggest challenge was designing the Libyan Pavilion for Shanghai Expo in 2010.  His first logo was drawn on a piece of napkin, and actually sold like that when he was still in high school for the Arts in Sarajevo. Now, with almost 20 years of experience, he enjoys wrapping all of your brand, web and mobile projects into shiny wrappers that your users will be more than happy to eat up.

Digital Journalism Advisor for BMAP is a long-time journalist and news editor, former Head of the Croatian Radiotelevision’s News Media Service, and a former Executive Producer of Aljazeera Balkans. Last three years, she has been working on various regional projects as a media consultant focused on newsroom integrations, TV and digital production. She received the State Department’s PDY scholarship in 2007. and is the alumni of the Academy for Political Development.

He is the Senior Business Development Manager for Balkans,  MENA & West Asia and is responsible for building the BBC’s family of partners and informing the development of new content in this part of the world. Since joining the BBC in 2007, BBC has pioneered two highly successful news and current affairs co-productions with independent broadcasters (radio and television respectively) in Serbia and Turkey. Both co-productions achieved significant increases in reach as well as innovating output that deepened impact.

Dušan has more than twenty years’ experience in news journalism; including at senior editorial level where he ran the pressurised news room of Serbia’s lead independent national broadcaster B92 from 1996-2000. He also has significant experience of commercial radio management and prior to joining the BBC, he worked as a consultant for various European broadcasters and international media companies for more than decade, including work in Sierra Leone where he helped establish a local radio network.

Dušan also established Serbia’s first independent radio network in 1997, taking it to no 2 market position in 2 years and significantly increasing local and national advertising share for its members. Dušan is author of a political history of B92 book and father to Amy Rose.

Evliana has more than thirty-five years’ experience in local and international media as journalist, editor and media manager in print, radio, TV and now online media organizations. She is a multimedia producer and documentary maker, an inspiring coach, mentor, trainer and program manager.

Beside journalism she was involved continuously as an independent consultant in media development, policymaking and education. She worked for various domestic and international organizations across Asia and Pacific as well as CEE/CIS countries.

Berani holds MA degree on European Studies. In recent years she worked as lecturer, Vice Rector and Vice Dean for Kosovo Higher Education institutions. She is based in Kosovo and works as Editor in Chief of the News Portal "Info Globi" which she established back in 2010.

He is trying to transfer his knowledge and experience to students of library and information sciences at the Faculty of Philosophy, University of Sarajevo. He is also working for USAID’s Balkan Media Assistance Program (BMAP) as a trainer in data journalism and data visualization as well as editor of www.balkansmedia.org.

He is a bioinformatics engineer, currently based in Barcelona, at the Institute of Marine Sciences (ICM-CSIC), where he is working on visualizing the global abundance of marine microbes and constructing cloud based data analysis pipelines. When not pursuing hard science he likes to apply his skills to analyzing electoral data, fake news, and visualizing different publicly available datasets.

She is a professor of television and multimedia journalism at the Journalism and Media Production Department at the Faculty of Political Sciences,  University of Zagreb. Tena Perišin completed her Masters Studies at the Faculty of Arts in Zagreb and defended her doctoral dissertation at the Faculty of Political Science in Zagreb. She also attended the Masters studies program at the Harvard University (USA) in 1984/1985, and was recipient of the Hubert Humphrey Scholarship Program at the S.I. Newhouse School of Public Communications at Syracuse University (USA) in 1994/1995. She has been an active television journalist, reporter and senior producer at the public service -  Croatian Radio Television (HRT).  At HRT, Tena Perišin was leading large projects (digitalization of the production digital,  launching of the News Channel HRT4). From 2002 she has been teaching tv journalism and media production at the University of Zagreb  In 2012. she launched the first student tv channel -  Student TV at the Faculty of Political Science and was in charge of various EU Projects (CARDS, EU IPA INFO, Erasmus+). Now Tena Peršin is in charge of 4-years Croatian Science Foundation projekt  JOURNALISM RESEARCH LAB: Innovative storytelling Practices to Engage New Audiences.

She is a former BBC World Service and Radio B92 journalist, expert in digital media and social media networks. She leads projects related to ethical standards in the digital age, disinformation, diversity and quality journalism in digital environment.  As media trainer and workshop facilitator, she worked with media outlets and civil society organisations in China, Turkey, Eurasia and MENA regions, and in the Western Balkans.

She is a reporter and editor of KRIK’s project "Raskrikavanje." She began her career as a journalist in the "PG Network" in 2011 and continued at "Istinomer" where she worked until October 2017. She received the National Award for Investigative Journalism.

Fake news in times of Covid-19
© 2021 Balkansmedia All rights reserved.