How well do you read news? Hibrid launches Checkos platform for countering disinformation 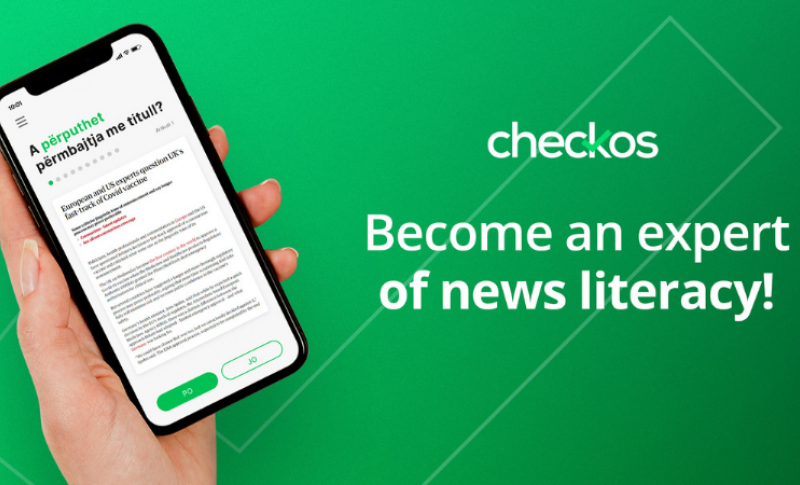 Today, the fact-checking platform, Hibrid.info launched Checkos platform, which aims to provide basic skills to Kosovo citizens for identifying professional journalism standards and code of ethics. The platform is launched as part of the media literacy engagement and can be accessed via www.checkos.info.

This platform consists of a database of news articles that are available to citizens to test their knowledge of journalism standards and code of ethics and a prepared guide on how to do so. The platform will serve as an educational hub, where users will be able not only test their knowledge, but also learn.

The ultimate purpose of "Checkos" is that through its use, citizens identify their level of knowledge about news articles that are consumed on a daily basis by various media in Kosovo.

The phenomenon of information disorder is a challenge faced worldwide, which has led to a decrease in trust in the media by citizens. Kosovo is no better, where with the explosion of new online media professional reporting standards are often dismissed. Hibrid.info on daily basis counters several articles that do not adhere to journalism standards.

Information disorder became even more notable during the COVID-19 pandemic, where unconfirmed information about the pandemic and vaccines was spread and endangered public health. But, that goes back far beyond the pandemic.

However, the founder of this platform, Gentiana Paçarizi, says that through Checkos, she has taken another approach, not to put the blame in media only, but to empower the audience.

"Through Checkos, we aim to provide the audience with the basic skills to distinguish between news that adhere to professional standards and those who don’t. When the audience is ready to apply these skills, an increased support for professional media, which really takes its time to inform citizens, will be noted. Citizens carry a good part of the blame for the current state of media landscape because, in lack of media literacy skills, they don’t challenge the information they consume through critical lenses. Naturally, media go after audiences likes and dislikes, so a vicious circle takes place which is very difficult to be stopped."

The preparation work of Checkos has been overseen by a group of experts covering the field of media in Kosovo, including academia, media and media (self)regulatory bodies.

"Apart from identifying fake or misrepresented news, which is done on a daily basis in Hibrid, Checkos is complementary as it tries to remove some of the burden from the specific bodies in this engagement and transfer it to the audience themself," Osmani concludes.

Paçarizi, adds that the results obtained from this platform use will serve the stakeholders in this field to clearly see the urgent areas of intervention.

“In Kosovo, data on the level of media literacy among citizens are scarce, if any. Checkos is designed in a way that is practical for everyone and produces performance data based on age, gender, education and geographical location of users", says Paçarizi, adding that this data can provide with a more realistic picture of where Kosovo is as a society in relation to critical media consumption.

This platform is in its pilot phase now and will soon be available as a mobile app for iPhone and Android users.

Checkos is an awardee of Media Innovation Lab that took place in December 2020 supported by USAID's BMAP, implemented by Internews in Bosnia and Herzegovina (BiH).

The Covidmembrance Digital Museum is out now

The third Media Innovation Lab has started: Ethical reporting during a pandemic
© 2022 All rights reserved.